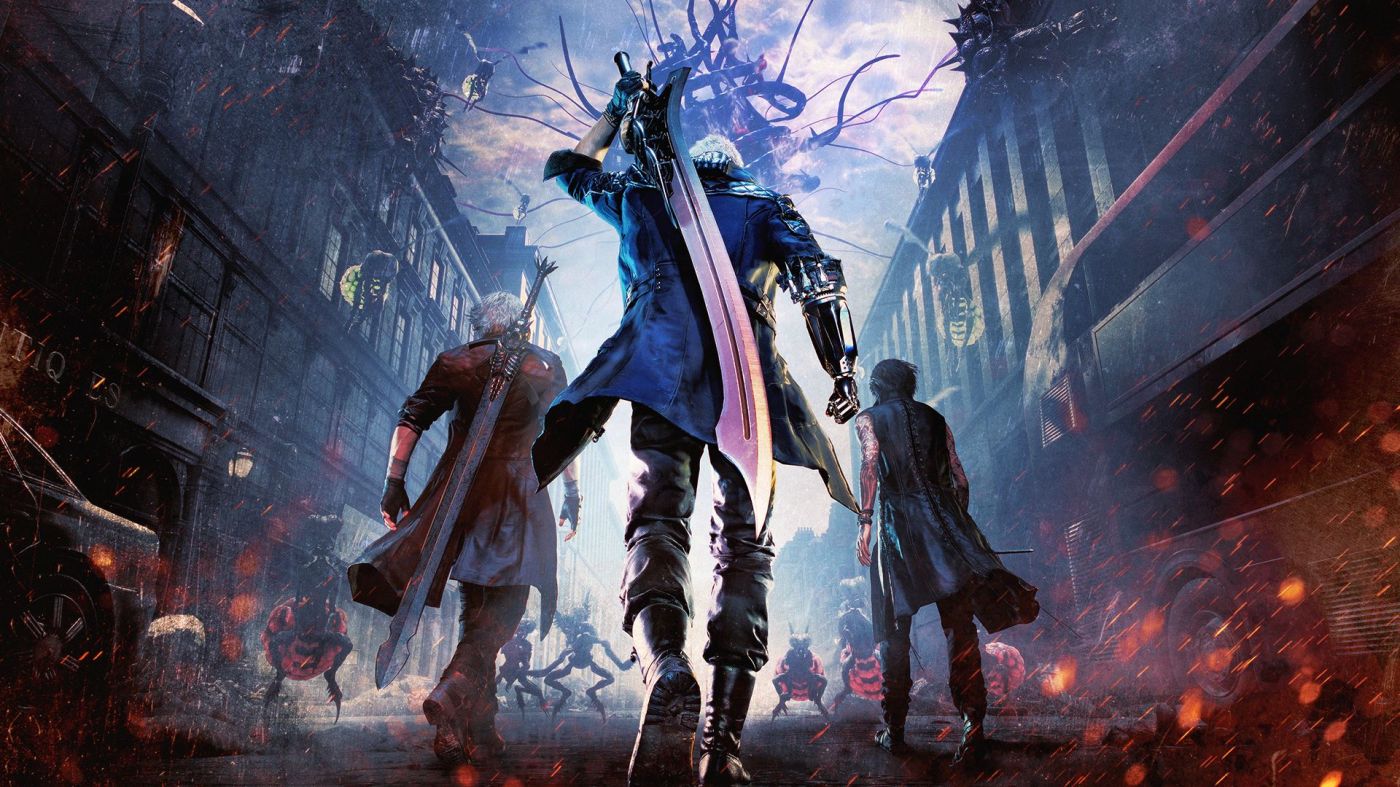 Devil May Cry 5 is a 16-hour exploration of the hundreds of ways a magical man might hit a demon. There are swords and guns, of course, which you use interchangeably to create flowing, acrobatic combos. Alternatively, Devil May Cry’s ageing original hero Dante can hit demons with two halves of a haunted motorbike. Nero can slap on one of seven mechanical arms that can punch enemies with a big electric fist, or shoot rocket fists that punch demons from a distance. The magical antihero V commands a demonic condor and a panther to hit demons for him. All of these approaches look sensational, and feel so good that I’m happily ploughing into new game plus when the review is already finished.

It hasn’t been a hard one to write because Devil May Cry 5 is simply one of the best games about hitting demons ever made.

You switch between Nero, V, and Dante as the story dictates across DMC5’s 20 missions. A demon called Urizen is using a bad tree called the Qliphoth to drain the city of all its blood and it’s up to the trio to fight through his minions to stop him. The story is preposterous, genuinely funny at points, and supported by earnest performances and quality performance capture. Though many of the areas you visit can be simplistic and a touch monotone and washed out, it’s a decent enough setting for tremendous combat encounters.

In classic Devil May Cry fashion you clear the level room-by-room and collect ranking scores from each encounter that feed into an overall score for the chapter. The point isn’t merely to survive, but to reach the upper echelons of the scoring system and claim the coveted, ridiculous ‘Smokin’ Sexy Style!’ title. The game marks your homework as you play and deducts points for repeating combos and taking hits. The game really sings as you start fighting at SSS level, switching weapons and zooming around the combat space to build a gorgeous improvisational combo of sword slashes, fire gauntlets punches, shotgun blasts and dazzling robot arm attacks.

Devil in the details

Each character has their own fighting style, but there’s plenty of opportunity to find your own preferred approaches within each moveset. Nero’s basic abilities let him attack with his sword and revolver. You can hold fire button to charge the gun and deliver bullets that can stagger enemies, and you can rev your sword like a motorbike to power it up and access fiery new moves. Nero can also whip enemies closer or pull himself towards larger enemies with a tether he fires out of his right arm.

Within this stable framework of go-to combos you use Nero’s disposable robot arms to mix up combos or move around. The Gerbera arm lets you fire shockwaves that propel Nero away from enemy attacks, and the Punch Line can detach and fly around as Nero rides it. The arms break if you take a hit during their special move, but you tailor an arsenal of up to eight arms before a mission starts and detonate them whenever you like. Some arms do give you an advantage over certain enemies—the many lashing hits of the whip-like Helter Skelter can shatter guarding enemies, for example—but the system is lax enough to let you pick the arms you really enjoy using in any situation.

If Nero was the only playable character this would still be a fine game, but Devil May Cry 5 offers so much more. Dante can switch between four melee weapons, four ranged weapons, and four combat styles on the fly. This spectacular range of attacks in part harks back to previous Devil May Cry games with the classic sword combos and stinger dash, but his new abilities are even better. Dante can switch out his guns for a hat and scarf combo that lets him attack with the game’s red orbs currency. Lock on and launch a forward attack and Dante throws the hat onto the targeted enemy’s head. While demons are wearing the hat they shed orbs that you can collect and then throw right back at them.

The hat is great because it demonstrates DMC5’s wilful tendency to be incredibly smart and stupid at the same time. You can build your whole combat style around the hat’s clever orb switching mechanics, and in a random nod to Journey, enjoy the way the red scarf grows longer as you collect orbs. But perhaps more importantly, you can make any enemy in the game wear a dumb hat. It even works on giant tentacle-faced rhino monsters. It even works on

V is the palate cleanser of the three. He has a less developed set of abilities, but they feel quite different to Nero and Dante. V struts around the edges of the battle reading poetry from his book as his pet demons rip up enemies. The melee attack button controls attacks with V’s Panther, Shadow. The ranged attack command controls his eagle, Griffon. Once you’ve landed enough hits to build up your super gauge, you summon a massive oily golem called Nightmare to clobber everything into a near-death state. The demons can’t actually kill anything, so you have to teleport V around the battlefield to deal final blows with his cane. He does this as nonchalantly as possible.

V’s style feels sloppier than Dante and Nero. The panther seems to just do its own thing sometimes and both creatures can teleport back to V’s side at inappropriate moments. If there are intricacies to the control system that stop this from happening, I haven’t found them. However, with a couple of move unlocks V reliably hits SSS rank thanks to the demons’ various area-of-effect attacks, which reliably overlap to juggle enemies. V’s sections are a fun power trip and a nice breather from Nero and Dante’s surgical combat styles.

Between missions you can pour red orbs into weapon abilities to unlock new moves. At some points you find payphones that summon the Devil May Cry van, driven by wisecracking tech support character Nico, who delivers some of the campaign’s funnier putdowns. Here you encounter the minor irritation of having to buy each Devil Breaker Nero arm that you plan to use. This, and a couple of poor boss fights are the main factors that really let the game down.

Nero, Dante, and V don’t reach their full potential until the end of your first run through. The next difficulty level remixes every combat encounter and lets you keep all of your unlocks. The refresh is so extensive that it makes the main campaign feel like a mere tutorial, and this is before Capcom adds the bloody palace gauntlet mode in April.

I’ve been hitting demons in this game for 19 hours so far, and I can easily see myself putting in 19 more. The setting lacks the flair and imagination of the genre behemoth Bayonetta, and those boss fights make it a slightly more uneven experience, but there’s a greater variety of combat styles and a higher degree of challenge that will will keep me playing until Capcom hopefully releases another one. If you enjoy third-person brawlers DMC5 is a must, and if you’ve never tried one before, this is a great place to start. What a treat.